Surprise No. 1: So, yeah, you ever tried something you thought would be very easy and simple, but which turned out to be pretty much the most complicated and annoying process you have ever gone through, and later on you realize that you should have know it wouldn't be easy? We have; applying for a Chinese visa in Hong Kong. Our plan was to get the applications in on Wednesday, pay extra and get a rush service, collecting our passports on Thursday or maybe Friday, and take the T100 train to Shanghai on Friday afternoon. Yeah, right, as if...


In short (we'll save you from all the painful details; there's plenty): We went to the embassy four times, on three separate dates. We had checked and double checked all we need on the governmental website, printed out and filled in the forms available on the said website, attached everything that was required, and went to the address given online (on the government website) on Wednesday morning. That address is wrong, here is the correct one! Once we got to the visa office, there was a short queue to get to the security check. On the 3rd floor of the building, after queuing in another line, we were told our forms were old, and given the new ones to fill in. Only after that were we given queuing numbers to the admission desks. There we were, of course, told that we were missing a whole bunch of attachments, and we were to go back to our hotel to get them. That's also when we were finally given the full list of things we'd actually need to attach. This all took about a whole morning to go through. Of course, our hotel was not in Hong Kong Island, but in Kowloon. So, on Wednesday afternoon, we were back with all the correct papers and queuing again. At this point we were told no rush service to get the visas was available (unlike told online), and it'd take until next Monday to get the visas. Naturally, our train to Shanghai would be leaving on Friday, in two days. So, since a ticket TO China and OUT of China are both required, and the travel dates would have to be AFTER your visa's issued, we were sent away once more, to cancel our reservations in Shanghai,  and get new tickets and hotel dates for after possibly getting the visas. So, next morning, on Thursday, we went back to the admission office, and once again queued, and presented all our new travel documents, and fresh visa forms (which we had once again filled, with new travel dates), and finally got a blue paper saying that we may collect our visas on next Tuesday. That's the story in short. 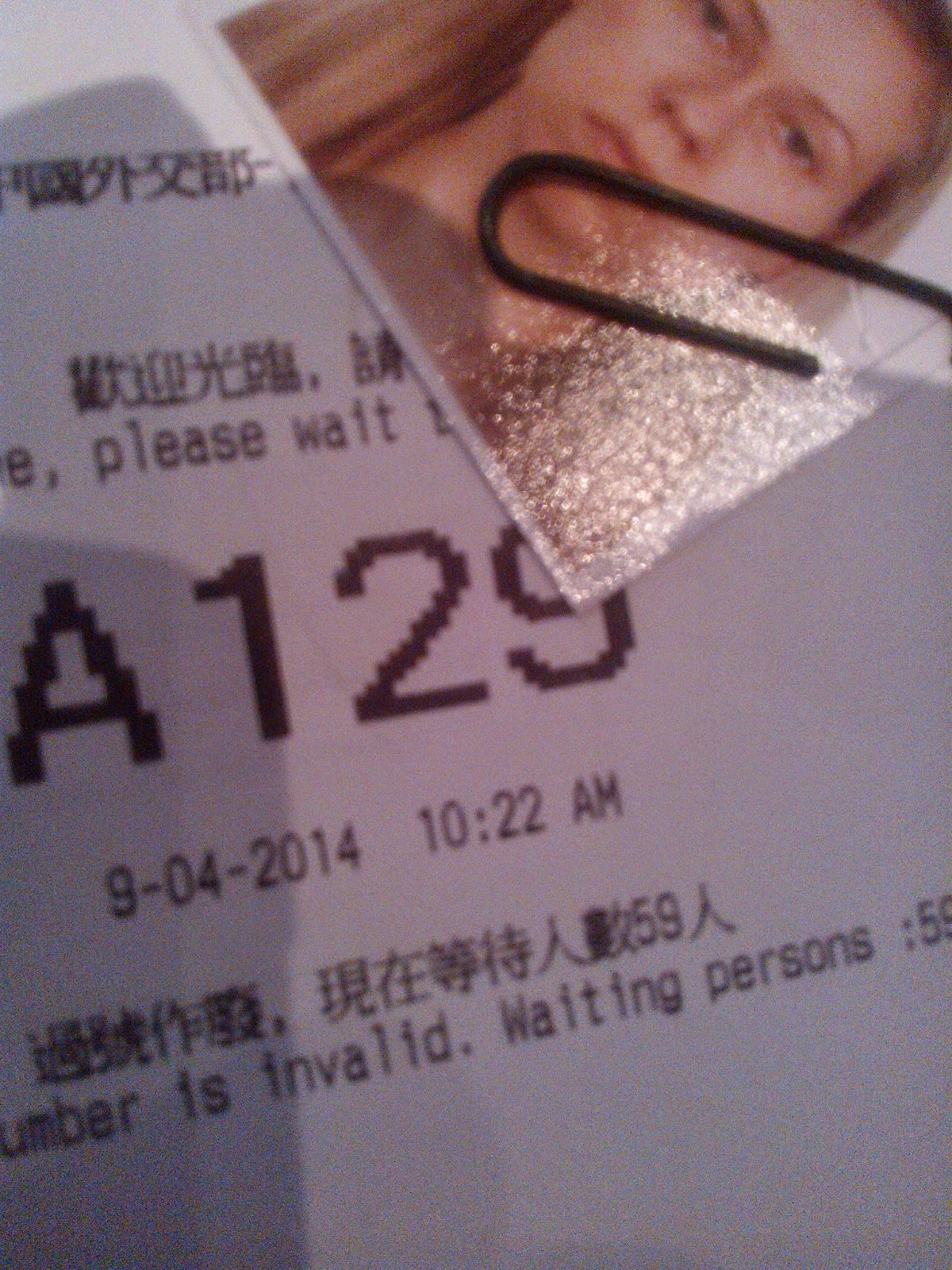 What the (apparently secret?) list given to us says you'll need when applying for a tourist visa to China in Hong Kong:

- Round-trip tickets to and from China
- Hotel booking confirmation in China (if not under your name, the person who booked the hotel needs to write and sign a paper saying you'll be staying with them, plus a copy of their passport)
- Copy of your passport and Hong Kong visa and a fresh passport photo
- The NEW visa form (collect it at the admission office) filled in (we only did it three times to get it right)
- 200 HKD upon pick up
- an address of a friend or a hotel in China
- Ability to resist the temptation to kick/hit someone or scream mindlessly when being sent to another line after a couple of hours of waiting
- Ability to understand that there WILL be waiting. The office is open from Monday to Friday 9-12 -AM and again 14-17 PM. The queue starts forming an hour before the doors open. Deal with it!

Surprise No. 2: Today's the Tuesday, and YES, we got the visas :D

Surprise No.3: It turns out there is quite a few Chinese, whose English is better, and Mandarin worse than mine... Not so common in the mainland, but apparently a default setting in Hong Kong.

Surprise No.4: We found a sauna! An actual, true, real, authentic Finnish sauna. It is located at the Mira hotel Hong Kong. The hotel is in any way a real nice one, but the Harvia sauna was what really made our extended stay in Hong Kong have an awesome kick start.

Surprise No.5: In the end, we really enjoyed our time in Hong Kong, even as much as to say that it was a good thing we didn't get our visas any earlier. Victoria Peak, the Symphony of lights show and just going around the city were really worth all the trouble we went through rescheduling such a big part of our trip. We got an 80% refund of our train tickets, and were able to cancel the hotel in Shanghai; in the end, we only lost a couple of hundred euros, and gained a ton of beautiful experiences. Also had time to drink a lot of Tsingtao...

Surprise No.6: Judging from a one-night layover in Singapore, the city is not bad. Well, I guess that's not a surprise to anyone who's ever been there. It's also a great place to meet a friend for a morning coffee :)


P.S: If you're staying in Hong Kong for more than 3 days, get the Octopus Card!

It has come the time to say goodbye to Indonesia. A short layover in Singapore today, and tomorrow we will enter Hong Kong. There our task will be to get our visas to mainland China. The next few days we'll also try and not lose all our money; Singapore is the most expensive city in the world, and Hong Kong is not far behind. So, goodbye to cheap luxury, too. We will, however, be enjoying China for a month after that. There there won't be a need to stretch one's yuan, since you can find pretty good stuff for pretty cheap there. If you know where to look, that is...

But until we actually get to China, we can still enjoy the easiness, cleanliness and hospitality of Bali for a few more hours. Ever since we started the trip, we have had a daily budget, which we routinely have gone under. It means that every day it has gone bigger. THAT means that we have once again been able to stay a couple of nights in a super fancy place with no worries of extra bugs or dirty towels. Conrad Bali can boast having the largest swimming pool in Bali, as well as their own beach. Morning runs are pretty awesome by the sea, running a nice, tidy prick road watching the sun rise and checking out other resorts' "backyards". Otherwise our accommodation has once again varied from budget in Kuta (super touristy, busy, noisy, lot of services and a beach available) , to cute resorts Ubud (touristy, small, nice, quiet, a vegetarian's paradise). 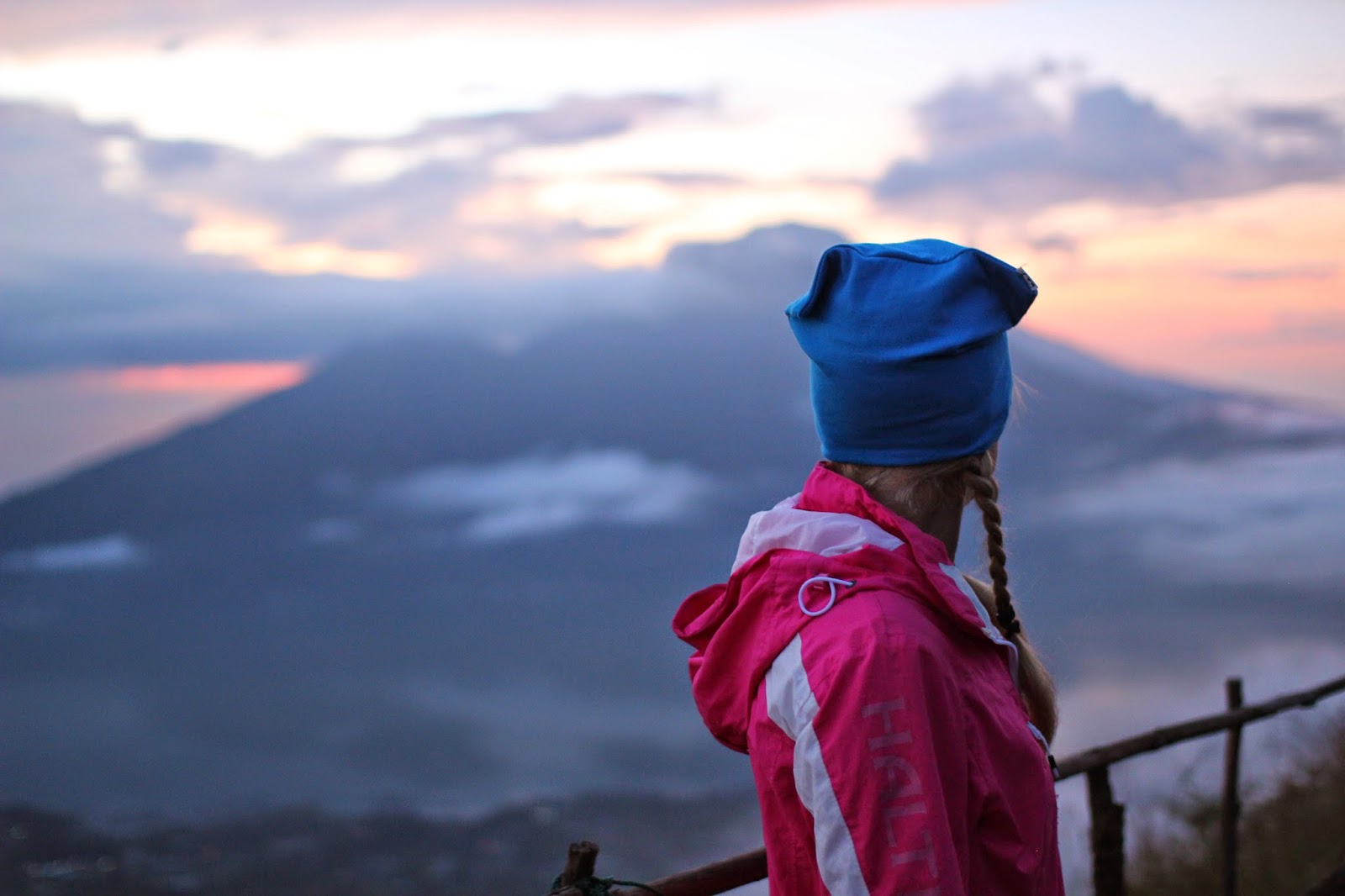 Speaking of mornings and sun rise, we climbed two hours on Mt. Batur to see the sunrise with a group of other tourists. Worth the climb (on all fours at some point), the view was spectacular. It was also incredible to feel the cold air in your lungs and on your skin the first time in months. Goose bumps have never felt so nice! The trip cost us 700 000 IDR per person, and we took off from Ubud at 2:30 in the morning, and were back already at 10:30.

Being known for extreme sports lovers' paradise, Bali offers a ton of other activities, as well. We tried some, but not nearly all of them. Most of the trips included food of a kind, and vegetarian food was always available, as long as we asked for it when booking the trip.

Mountain biking was well organised, and we got a chance to not only eat breakfast looking over Mt. Batur crater lake, but also visit a local coffee plantation and taste the rarest coffee in the world, Kopi Luwak. Being processed through a civet cat's digestive system before washing, drying and roasting, the end product of the coffee beans is also locally known as "cat-poo-chino". It tasted like coffee. In the end of the two-hour bicycle ride downhill, we had a chance to try and ride uphill for 8 kilometers. In the heat and humidity, it turned out to be a um... a bit challenging, unlike the very easy downhill part. An awesome lunch was provided afterwards. There were also huge spiders available. Also spider petting. Luckily that was not mandatory.

Rafting  was water, water, jungle, water, amazing nature, swimming in the Telaga Waja river, physically semi-challenging and pure awesomeness. 2,5 hour ride took us through such cool waters and scenery that the pretty high price didn't really bother us. Just remember to hold on, and wear clothes suitable was soaking ;) You can also bring your camera and other stuff to the boat, the guide will give you a waterproof bag for them.

Tandem paragliding  provided beautiful nature, a good way to beat your vertigo, gliding over the sea and an amazing way to experience a moment of tranquility. It was not physically challenging, although the winds and the "bag" you'll be sitting in do set their limit when it comes to weight. I got to do a whole 15 minutes, while Ari only got about 5 minutes, plus a beach landing. This applied to the rest of the group, as well, for the winds were not strong enough that day.

One of the less extreme activities we did was the organic vegetarian cooking class, in the middle of rice fields. We got to pick our own vegetables, and learn from the best how to make Balinese dishes. Or at least we got to participate, while the family women did most of the hard work. The one thing we learned was that no matter how much we'd like to make all those dishes at home, we just cannot find nor the ingredients or the equipment in Finland (e.g. the huge stone grinder used for grinding the peanuts for gado-gado, the sauce which tastes of pure heaven).

How did we book these trips? We simply walked into any of the many "travel agencies" i.e. wooden boxes laid by the streets, selling the trips. The service was reliable and smooth nearly every time. We were always picked and dropped off at the hotel, and all the tour guides spoke if not perfect, at least understandable English. 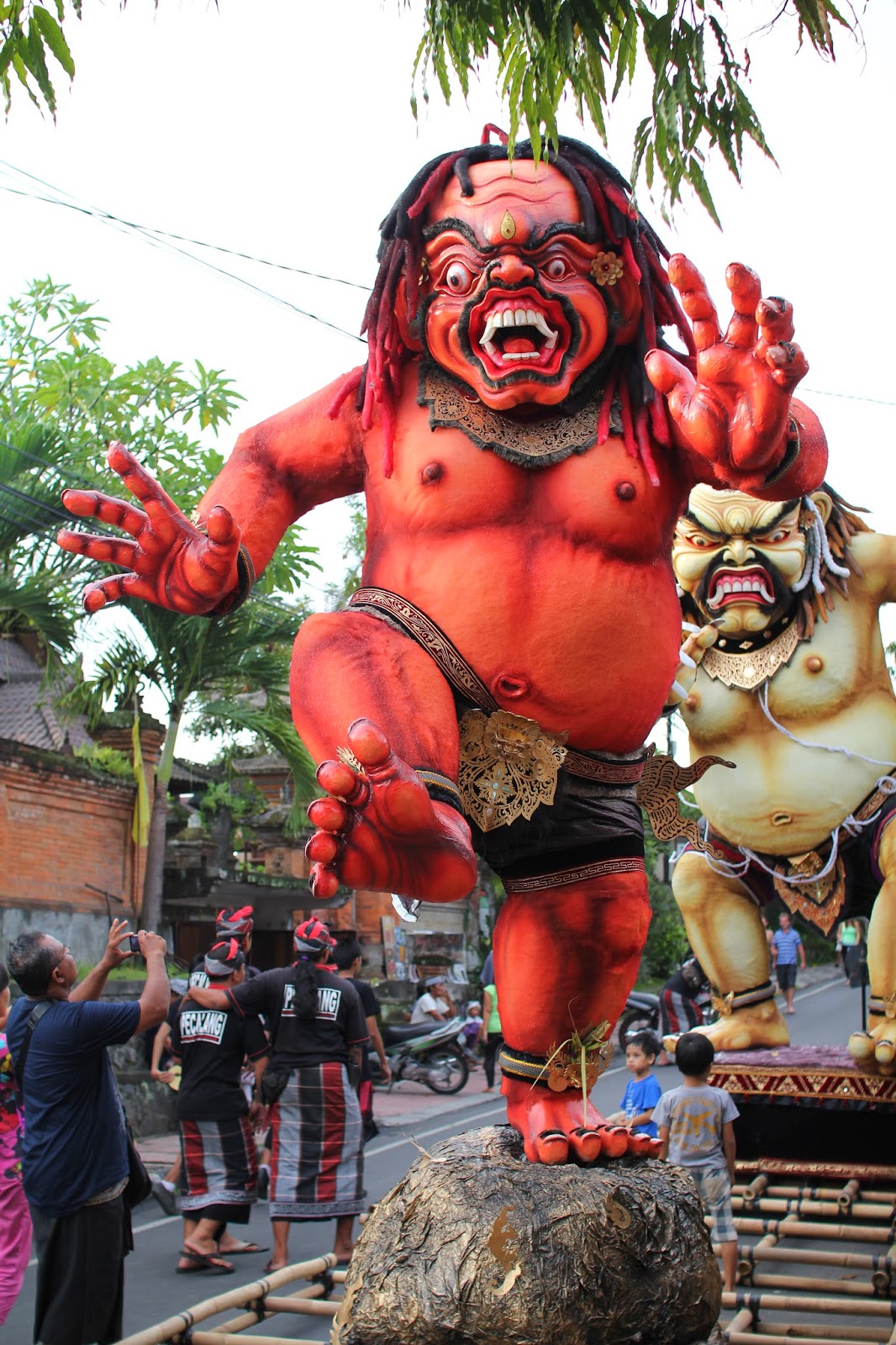 To balance things out, we got to experience the Balinese new year and the Quiet Day in Ubud. The locals celebrate the new year by building huge monsters, each village and district their own. These monsters would be then carried around the streets and apparently beaten up, as well, on their way to be burned. All this to get rid of evil and bad thoughts. Must admit, it was pretty creepy to see them on fire in a dark cemetery, where the Ubud monsters were burned. We were told that the scariest looking are saved though, apparently being saved by their coolness.

Next stop Singapore, then Hong Kong, then mainland China. Should be interesting!