Happened so far: we started our trip quite fancy in the United Arab Emirates, staying in a five start hotel Sofitel in Abu Dhabi. Could not afford their breakfast services, but gym and private beach were complimentary. So, how is a five start gym like?

So, basically just like anytime we exercise together at home. 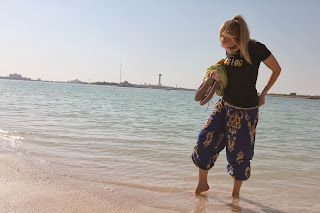 The new year's eve was spent seeing a movie in a VIP Vox Movies theater (The new Hobbit 3D, of course) at the Marina Mall. Goddammit, it seems the more money you have, the louder your Nokia tune plays. Multiply that by a dozen, and you know how it was like trying to concentrate on watching the movie with all the locals. We also tried Indian fast food, only affordable food at the mall. No upset stomachs afterwards. Besides a movie theater and fancy restaurants, the mall also had a ton of toy stores, where little sheikhs could do their toy shopping with their servants, which Ari witnessed with his own eyes.

It is winter here, so naturally the beach today was not very packed. It is also relatively cold (that being hot as hell, around 25 degrees), so the tourist season is not at it's peak. After a few hours grilling myself, we longer are whiter than two sheets of printing paper. 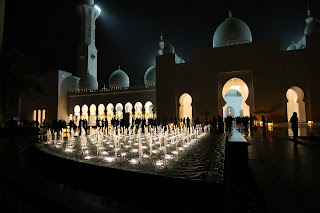 The Sheikh Zayed Grand Mosque was something totally awesome. Built in 2007, the gorgeous white building with it's towers and world record interiors is something everyone visiting United Arab Emirates should see. However, remember to check what you are wearing before going. My wrists were exposed and a guard sent me through a garage to some mysterious basement to get a veil. I could not get one because I had left my ID with Ari, who was waiting upstairs, and the outfits were not handed out without a proof of identity. Being a smart girl, I later went to the mosque pass another guard, and had no problem. Around that time I was told by Ari he had heard something tearing while getting to the mosque earlier. We looked into the situation, and learned the sound had come from his jeans. The inner seam, to be exact. Apparently blue and white checked boxers are no problem to the local authorities, since we heard no word from them about it.

So, tomorrow we will head to the cold New Delhi (15+ degrees...), and once we get there, we will do some jeans shopping!