Tonight is our last night in Delhi. However, few days ago we were sure there would not be even the first one. Happened at the Abu Dhabi airport check-in counter: 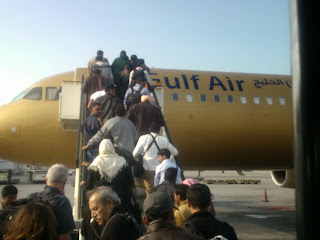 Airport guy: "You are going to India?"
We: "Yes"
AG: "Where are your visas?"
We: "We will get them in Delhi, on arrival"
AG: "You cannot go to India without visas"
We: "We won't. We're getting on-arrival visas"
AG: "Have you been there before?"
We: "Yes"
AG: "Without visas?"
We: "No. We will get them on arrival at the Delhi airport. Finns can do it"
AG: "It is not possible. You will need visas"
We: "We will get them there. It is okay for Finnish citizens, and for a couple for other nationalities, too"
AG: "Nepalese can go to India without visas"
Emmi: "Too bad we're not Nepalese"
AG: "I will get someone"

So, if you're a Finn, Japanese, or for example from Philippines feel safe to get a 30 day Indian tourist visa on arrival at the Delhi International airport. You'll need 60 USD (less than you'd pay in Finland), a passport photo, a return ticket from India, and some patience to fill in two forms. There is a separate on-arrival visa counter at the airport, without lines it took us about an hour to get the visas, plus we got into the country through the diplomat security line. 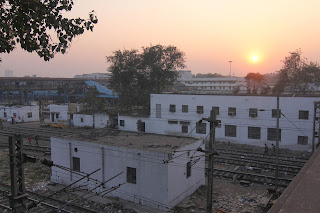 When we arrived to New Delhi railway station by the airport express train, the good old India hit us in the face and left no chance to escape; the smells, sounds and nearly oxygen free, smoke and dust filled air surrounded us from the second we stepped out the station exit. After traveling the whole day, we were desperate to get to the hotel as soon as possible. First challenge was to get there with our back-bags, in the dark and not realizing we were on the wrong side of the station.

Hotel Aura which is about 1 km from the New Delhi railway station, turned out to be a bit different than Sofitel in Abu Dhabi. No windows in our room, and hot water only after running the water for several minutes, and not always even then. Oh well, we have been enjoying the food and extremely cheap beer. And the service here is friendly and fast, so no harm done :) 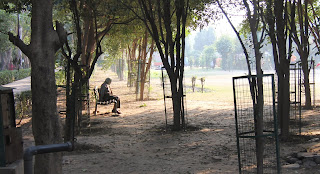 The weather in Delhi is super depressing, barely +20 in sun and really cold at night, so not much sightseeing has happened, but we have kept ourselves busy in other ways. Yesterday we managed to book several train tickets. From New Delhi to Agra to Jaipur, altogether the tickets for two people were around 1200 rupees, about 15 euros. On top of that we paid almost the same for service at the ticket booking office. However, the service was smooth and the guy got us good tickets. The hotel booked us a taxi to the Nizzamundin railway station, which will be waiting for us tomorrow morning, for a relatively cheap price of 550 rupees, 6,9 EUR. We decided that to be a cheap enough for saving us all the trouble of getting at the station at six in the morning on our own.

In all this smog and noise, we are more than happy about slowly but surely heading towards Goa for three weeks <3